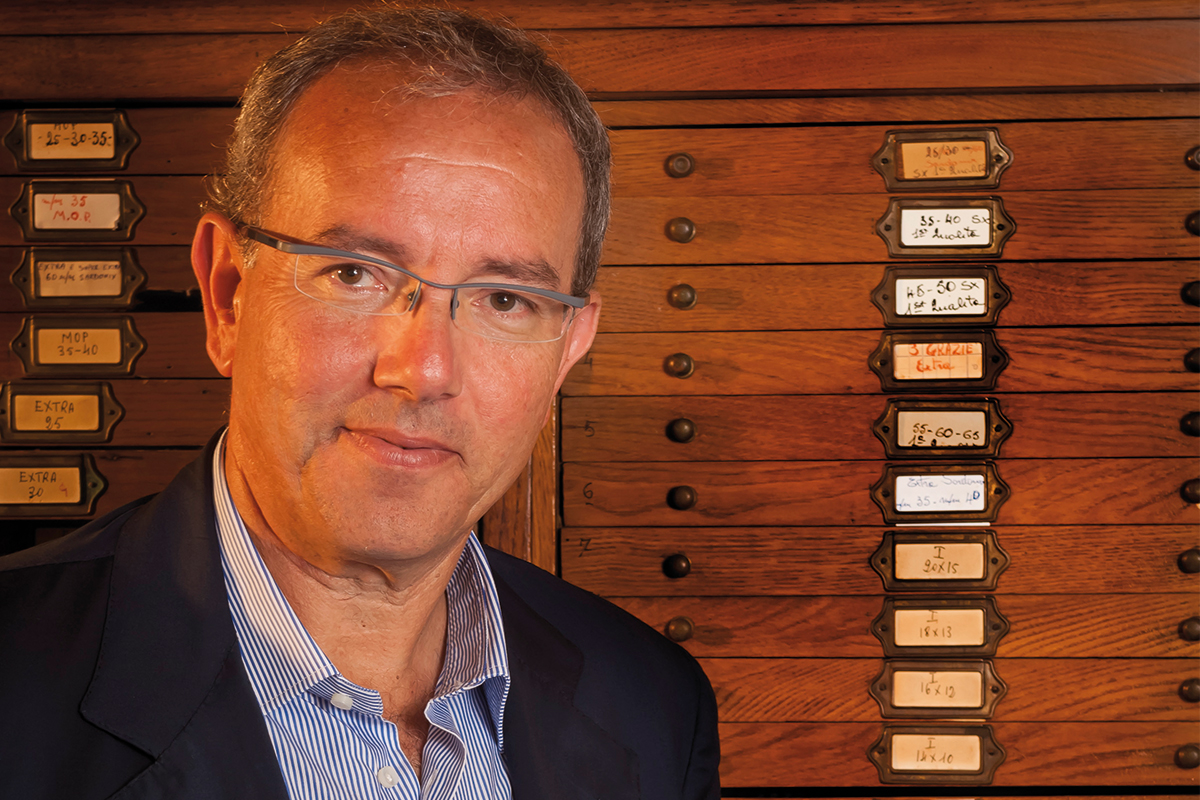 A year has passed since the start of the pandemic. What keeps a company’s helm straight when faced with such uncertain situations?
We obviously aren’t smiling, that’s for sure. We suffered a considerable downturn in 2020 but we are living and understanding the situation month by month. We’re a bit like Ulysses heading towards Ithaca… The moment you get back on track, you can see your destination in the distance but then it disappears again. We are bound to the conditions and, consequently, we are weighing up the various possibilities…

What have you changed in terms of plans made back in March 2020?
We are currently looking at the final stage of several projects that we had decided on exactly one year ago. We haven’t done anything different from a strategic point of view but as soon as we realized that there would be a considerable drop in trade for our ‘brick and mortar’ channels, we expected there to be less work at the factory. And so, instead of going to sleep and waiting for the storm to end, we decided to do the opposite. In other words, re-launch new projects, “taking advantage” of all our staff’s skills and potential.

When you speak of new projects, what are you referring to?
Mainly to launching the e-store and to being aware of how this extremely powerful, and also very distracting, tool can be useful due to the impact it will have when it integrates with the off-line business. It’s an interesting challenge. We have invested in e-commerce management which began at the end of 2020 with a new technology we first selected and then implemented and which is now in the fine-tuning stage. This has led us to think about a different organization. It is a system with several inter-connecting parts. E-commerce has to communicate with the rest of a company’s organization, it has to integrate and act as an impulse on the client side too. We embarked upon a project fully aware of our limits but the potential is so great that it needs to be well exploited. When you think about an e-commerce project for a brand, you might think it will conflict with the off-line distribution network. That’s not how it is, however, because it actually opens up a new world that you could never even have imagined before.

What initial feedback can you give us?
Reading the way the consumer sees the brand instead of always having looked at it with the eyes of the retailer. We have removed the frosty glass, which can sometimes distort the image behind it, to see what is happening “on the market” and this is giving us formidable incentive and input. After a month and a half’s activity, our clients’ reaction has been incredible. We are beginning to understand that interaction is not just a question of a commercial change. We have noted that it isn’t the price itself that arouses interest. The client’s attention is actually on the cameo, understanding the shells, the process, the engravings, designs and history. This interest in the product has really amazed us and made us much more confident. Now we will pilot our sales activities personally and the commercial aspect will come later. You know, in 80% of cases, people want to be able to touch and the digital platform helps us increase sales in the physical store.

What has struck you the most?
Realizing, for example, that we were wrong in thinking that we were the only ones who liked some collections (there are 35 in the catalog) and that clients were not partial to them. And also, the approach to purchasing through promotional offers. When an e-commerce website is launched, it’s normal for companies to immediately offer some kind of promotion, perhaps through a newsletter, with a discount coupon for the first purchase. In 80% of cases, we had to re-contact the customer because the coupon had not been claimed and that’s when we realized that real interest in one of our jewelry items was not influenced by a convenient price but by a fascination for the cameo world itself. This urged us to look more closely at the value of communication in our company strategy and reinforce it. Now it is our second priority.

With such a widespread presence on the Italian market, how are you coordinating your on-line sales with the physical retailer?
We are considering new, still-to-be-defined initiatives that foresee associating retailers to our business activities with an affiliation project with our stores. As for logistics, we are already able to ship goods anywhere and, depending on the country you log in from, a corresponding list is displayed. Obviously, prices are different in countries where taxes are applied but, in any case, we deliver anywhere at no extra cost.

What do people usually buy online and how much do they spend?
Our clients buy items that range from the smallest gifts to more important items from our collections and the average expenditure is higher than we initially thought. At the moment, the commercial aspect is less important to us than communication. We aim to inform a greater number of people about cameos and focus less on price.

Cameo Italiano is strengthening its presence on the Chinese market...
We had already begun in China with 15 sales points in multi-brand stores and one single-brand store in Wuhan, through b2b clients. There is enormous interest towards Made in Italy and the potential for development is still extremely large, something which both delights and scares me.
We are now taking a further step by opening our own headquarters in Shanghai which will directly distribute, without intermediaries (it should open in late spring). It will be called Di Luca Jewelry Shanghai and has already been approved. From there, we will be able to work directly on b2b within China with goods and contacts still to be developed. China wants to open its domestic consumption to products from the rest of the world and we want to be there with our hand-made, traditional, made-in-Italy craftsmanship because the Chinese want to speak directly with Italians, otherwise the fascination is lost. As for product, while we will never neglect our stylistic identity, we will adapt our collections to the Chinese spirit because they don’t like things that are too bulky. They are more inclined towards classic and vintage styles and they love our more fashionable proposals.